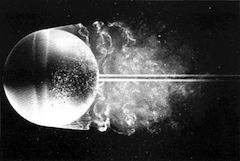 In this laboration you will do flow measurements using a simple open "wind tunnel". In order to be able to achieve the best possible conditions, one would need a big and expensive closed wind tunnel. It is, however, possible to achieve conditions good enough for this laboration using an open simple "wind tunnel" - an axial fan attached to a duct with circular cross section. Inside of the duct, guide vanes have been installed that breaks down vortical flow structures generated by the fan. At the end of the duct the area is reduced by adding a convergent nozzle. The nozzle increases the flow velocity and makes the velocity profile more uniform.

The laboration is divided into three parts: